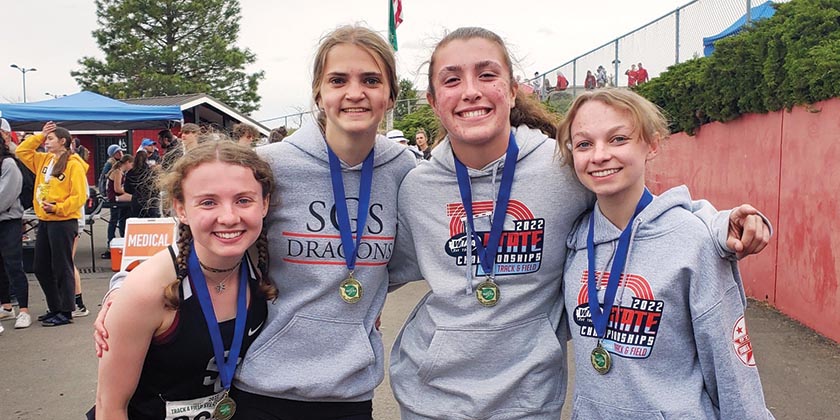 Spokesman-Review sports reporter Dave Nichols had so much to say about the SGS girls State Champion track team that it took two articles. He wrote on May 28:

The St. George’s girls won all three relays – and they weren’t particularly close. In the 4×400 race, the Dragons won by 6 seconds, matching the number of consecutive times they’ve won state in the event.

The 4×400 team was made up of Georgia Steele, Maggie McLaughlin, Savvy Briceno and Josie McLaughlin.

Senior Maggie McLaughlin took the lead during the second leg and the Dragons did nothing but extend the lead though the final three legs.

“It’s an amazing relief,” McLaughlin said. “We’ve all worked so hard and we just wanted to make our coaches happy and proud cause they’ve been there for us all along the way.”

“We love Maggie,” St. George’s coach T.J. Moulton said. “She stresses us out. But she runs so hard in everything she does. She’s always someone we can count on to just run as hard as Maggie can run. Can’t ask anything more than that.”

McLaughlin was a freshman when St. George’s broke the record of five consecutive wins in the 4×400.

“To make it six consecutive now as a senior it’s just so fulfilling,” she said.

“I’ve been working hard the past couple of years putting in the work and getting ready for college and now it just feels awesome.”

Then on June 2, Nichols added the following:

The St. George’s girls ran away with the team title and dominated the relays, winning all three – including the 4×400 for the sixth straight season.

“This just feels awesome because I love these girls so much, and I’m just proud of us,” Niven said.

“It feels so good to be a part of it and just in with these amazing girls,” Audra Gliniak said. “Yeah, it’s a family for sure.” 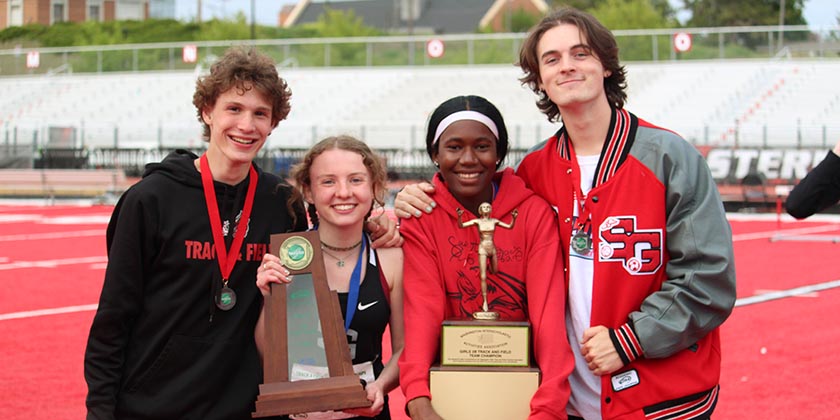 The SGS girls’ track and field team ran away with the State Title at the 2B State Championships in Cheney on May 26-28. See a Girls’ Photo Gallery of images from their events and of the State Trophy. The SGS boys finished 13th overall with several medals as well; see a Boys’ Photo Gallery from their events at State. Thanks to Jeff Thomas, Jayne McLaughlin, and coach Jessi Reed for the great photos! 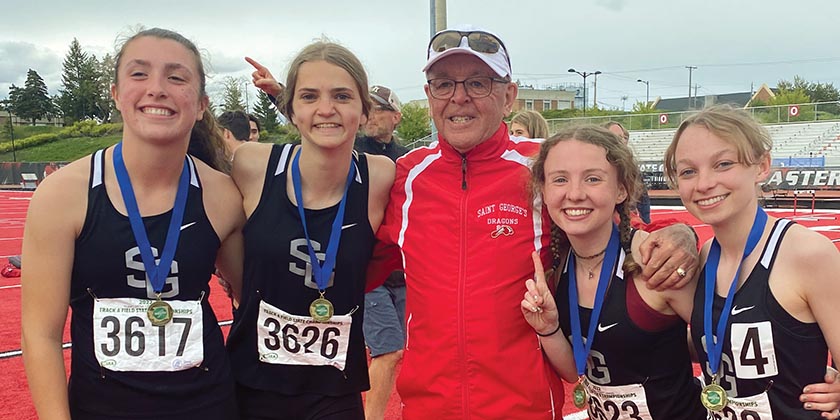 The SGS girls’ track and field team ran to the front of the pack at the 2B State Championships in Cheney on May 26-28, capturing the overall State Championship with 113 points, 24 more than 2nd place Okanogan. The Dragons were particularly strong in the relay races, winning the 4×100 meters and the 4×200 meters, as well as the 4×400 meters for their 6th consecutive state title in that event! See a video of the Girls’ 4×400 Finals Race. 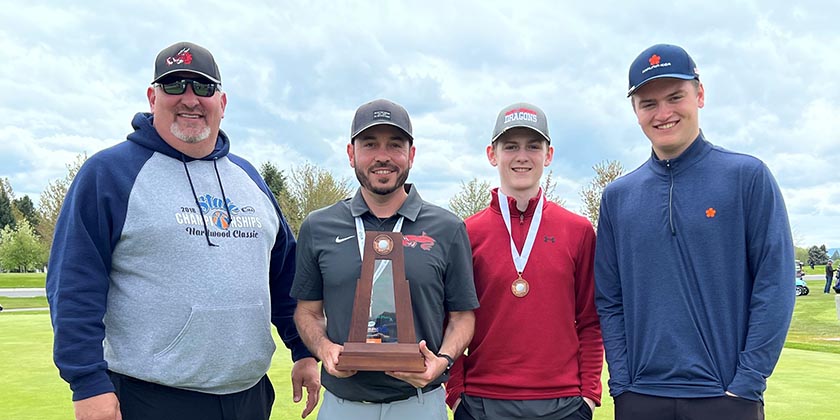 SGS golfers Matthew Longstreth, Nate Henning, and Luke Whitman all qualified for the 2B State Championships, played at our home course of Deer Park on May 27-28. The final SGS team of Matthew and Nate finished 2nd overall! Matthew, who shot rounds of 79 and 80, earned All-Tournament honors with a 6th-place finish. Nate shot rounds of 87 and 80 to finish 12th at State. See a Photo Gallery of them at the State Tournament, including hoisting their trophy! 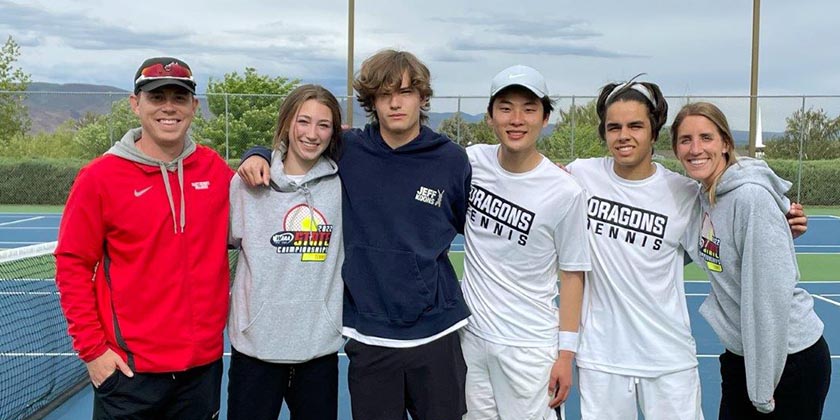 This past weekend (May 27-28), the Saint George’s Tennis team traveled to Yakima for the 2B State Tournament. The athletes that competed at State were Tariq Ravasia (12), Ethan Wu (12), Pelayo Zalba Montes (11), and Mia Tombari (8). “The boys played incredibly well but unfortunately didn’t place,” says coach Meghan Kilgore. “We are so proud of their effort throughout their tennis careers at SGS and look forward to another season with Pelayo.” Mia battled through the consolation bracket to earn 3rd place in Singles on the final day of the tournament. See a Photo Gallery of the players and coaches at State. 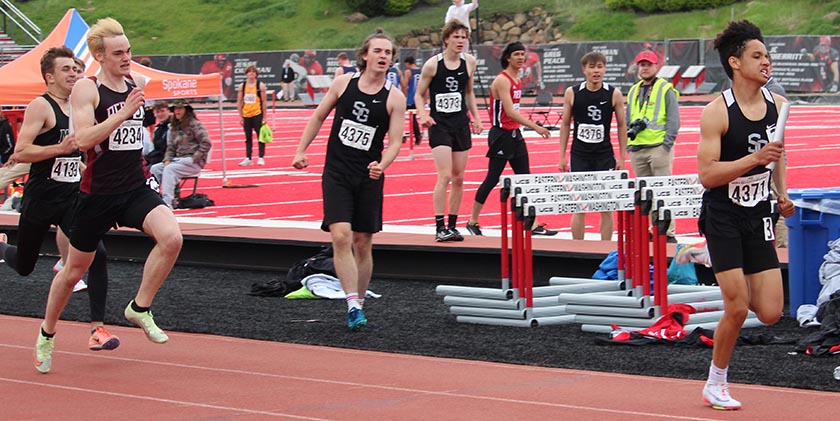 The Dragon boys track team had several high finishers at the 2B State Championships in Cheney on May 26-28. Their 4×400 meter relay team of Ben Sudlow, Max Rickard, Jack Morris, and Shawn Jones finished 2nd overall. Shawn Jones also was 5th in the 800 meter race, while Ben Sudlow finished 6th in the long jump, Ben Morales was 7th in the 1,600 meter race, and Robby Witmer jumped to 10th overall in the triple jump. The boys’ team earned 12th overall; see All Their Results.